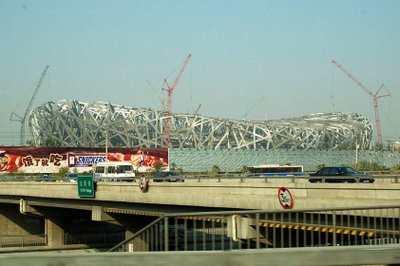 Today we feature a construction photo of National Stadium in Beijing which will play host to the 2008 Summer Olympic Games (XXIX Olympiad). The stadium will seat 91,000+ and will feature the opening and closing ceremonies as well as all of the track & field events during the Olympics. In 2002, Herzog & de Meuron teamed with ArupSport and China Architecture Research & Design Group to win the international competition for the design of the Olympic centerpiece venue.