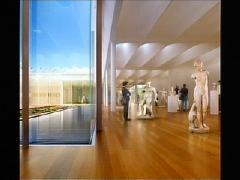 The North Carolina Museum of Art in Raleigh is planning a major expansion to its existing facility that will open to the public in 2009. Currently, the museum has one expansion designed by Smith-Miller+Hawkinson but in this case they have selected New York architects Thomas Phifer and Partners. The design will be approximately 127,000 sf and incorporate some interesting natural daylighting to be engineered, in part, by renowned engineers Ove Arup. An excerpt from the museum’s press release helps to provide insight into the design: “The new NCMoA building is a low-lying, single-story pavilion that merges visually with the rolling green surroundings. The building will be clad in satin polished stainless steel panels flush mounted to seamlessly and softly reflect the landscape and changing conditions of the sky and atmosphere to ethereal effect. A rolling roof plane dotted by occuli every 26 feet echoes the pattern of surrounding hills and hints at a path-breaking lighting system within.”

Which “Star” Architect Would You Hire?

Skyscraper Creates All Its Own Energy